Let it snow! Add this easy DIY Paper Mache Snowman Craft to your winter craft list this year and enjoy the smiles this whimsical snowman brings throughout the holidays. I had completely forgotten about paper mache and had also forgotten how fun it was to use and mold. Perfect ooey gooey Christmas craft for kids who like hands on crafting! 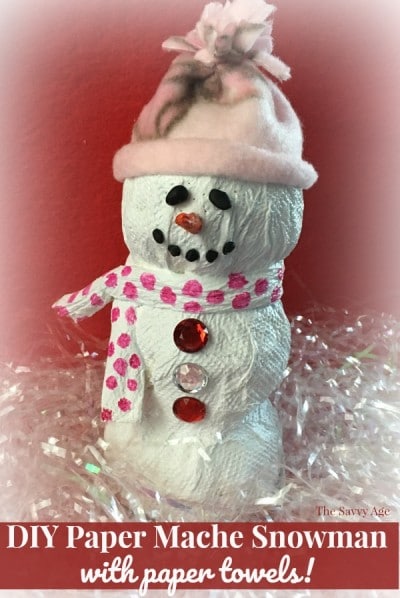 How To Make The Paper Mache Snowman

3 Styrofoam balls (size dictates the size of the snowman, I used 2.5″)

I promise this is an easy Christmas craft although the materials list may seem long! Most of the items will already be in your craft stash or can be found at the dollar store.

How To Make The Paper Mache Snowman Scarf 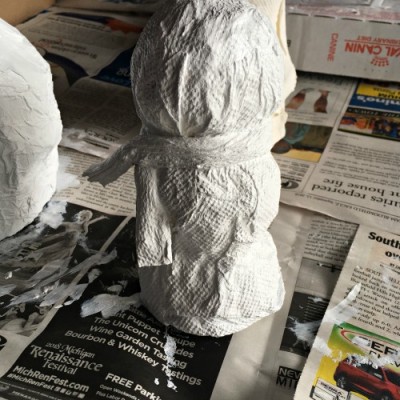 Use white acrylic paint and paint the paper mache snowman.

How To Make The Paper Mache Nose 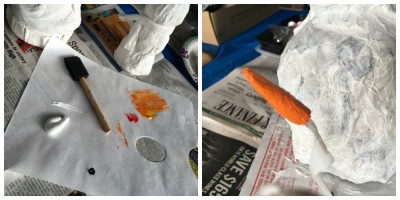 Paint the nose orange with acrylic paint or color with a magic marker.

While The Paper Mache Snowman Is Drying …

While the snowman is drying make the pebble mouth and eyes.

Choose very small pebbles and paint black. The number of pebbles needed will be determined by the size of the snowman. To ensure proper sizing the pebbles should be checked to the snowman head and body. Take a pebble and hold it in front of the location of the snowman’s mouth to judge if the pebble size is accurate.

Use the dollar store to find stick on jewels to make the snowman buttons or use buttons or pebbles.

How To Make The Snowman Hat

Scrap fleece is used to make the hat for the snowman. Follow the directions in the Snowman Candy Bar tutorial to make a no sew fleece hat.

After the snowman is dry then let the decorating begin!

I begin with attaching the nose first as the eyes and mouth are positioned according to the nose! Cut the end of the nose to the desired length and leave the end of the toothpick extending from the nose.

Position the nose and apply gentle pressure to push the nose into the paper mache head. 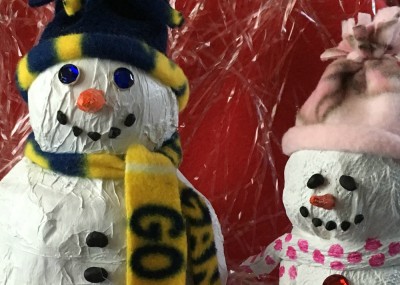 Brrr! The snowman needs a hat! I put the no sew fleece hat over the head of the snowman.  I sized a fleece hat from scrap fleece. Instructions available here for how to make a fleece hat with a glue gun. If the hat does not appear secure it can be glued to the head.

Of course the traditional snowman does have arms. Simply use twigs sized appropriately.

For this paper mache snowman I preferred the streamlined look and did not use twigs for arms. The twigs do not have to be glued as the twigs can be attached by gently pushing the end of the twig into the paper mache body.

Isn’t paper mache fun! Combine a mason jar and paper mache to make this snowman which doubles as a snowman and a gift jar! This is a Christmas craft for older children because of the mason jar, but the paper mache part and/or snowman decorating can be done with younger children. 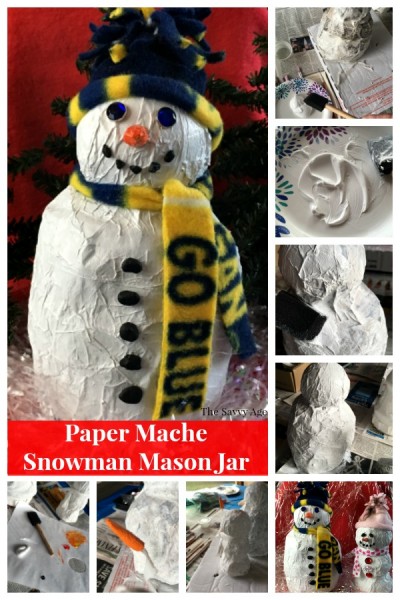