I love soup! I love taters! At long last, a potato soup recipe which does not disappoint. There is a reason 9,000 plus positive reviews are accurate.

So I cannot take credit for creating the recipe. I can only take a wee bit of credit for making this recipe enough times to throw out any other potato soup recipe I’ve tried. And I’ve tried quite a few; so many had flavor additives or thickening agents which this recipe does not and I found that to be a positive.

I found this recipe on one of my favorite restaurant web haunts, Allrecipes. I’m a fan of user reviews and love to read how people tweak the original recipe. My rule of thumb though is to make a new recipe as written before adjusting the recipe for my preferences.

Although the recipe is titled Ham and Potato Soup, the ham isn’t required. Bacon can easily be substituted or use both ham and bacon or use neither.  Which is again one of the best features of this recipe; it is a forgiving and flexible recipe to add or leave out ingredients as desired.

Half Recipe And Soup Consistency

What is wonderfully consistent about this recipe is … it’s consistency! Whether you halve the recipe, adjust the ingredients or substitute ingredients, the recipe holds up very well indeed.

I love that this is a recipe which is easily halved; half the recipe makes a 4 generous cups of soup. Depending upon your preference as to a creamy, chunky or somewhere in between soup the creaminess can be adjusted with a quick whisk of the immersion blender or smashing up a few of the potatoes. Make high cal or low cal depending upon your families preferences. I prefer a creamy soup so I do blend the soup after simmering for a nice smooth consistency. 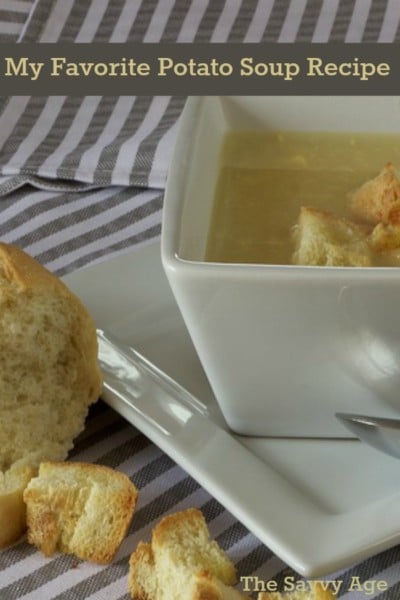 Shredded Cheese of your choice

Idaho, Yukon or red potatoes can all work

My Half Recipe Version

Salt and pepper to taste

While the above is cooking, make a roux. Melt 2 tablespoons of butter, whisk in 2 tablespoons of flour, cook for approximately one minute on med low heat. Careful not to burn the butter or roux.

Whisk in one cup of milk or 1/2 and 1/2, cook 4-5 minutes on medium heat, stirring constantly to thicken.

Add to soup mixture, heat thoroughly. Garnish if desired with your favorite cheese or herb.

Voila! A quick, easy and flexible soup recipe to add to your rotation.

This is a recipe which can easily tweaked if your favorite potato soup lover needs a soft food version. The ham can be deleted or the soup can be put into a blender after cooking to smooth the consistency or puree if needed. If the recipe is made as is, the vegetables will be very tender and soft.