Where are we now? An update on Parkinson’s Disease drugs, clinical trials, wearable apps and research in 2016.

The cost of Nuplazid is very high; estimates at $24,000 a year for the average recommended dosage by your physician. However, it is also estimated by GoodRX that 97% Medicare Part D and Advantage plans cover Nuplazid; deductibles, co-pays, donut hole all apply to determine your out of pocket cost.

However, the cost remains very high and one avenue to investigate is a Patient Assistance Program (PAP) where the patient applies to a program for a specific drug to receive the drug at a much lower or zero cost. Many restrictions to apply, but these programs are worth investigating. Nuplazid Connect is a PAP for the dug and information on PAP assistance can be found on the information page (scroll down to middle of page.)

Nuplazid is manufactured by Acadia Pharmaceuticals and is the first drug to treat Parkinson’s Disease Psychosis (PDP), a common and costly symptom of Parkinson’s. Additional details and the pharmacology of Nuplazid is available in an earlier post. 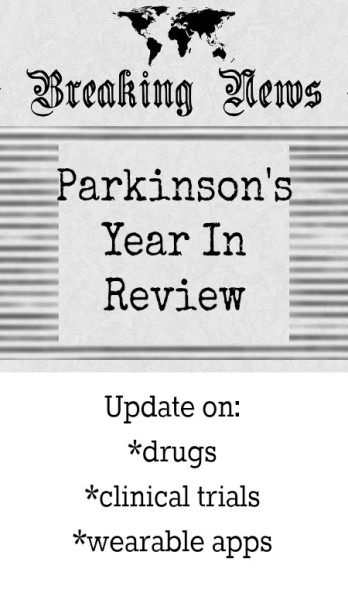 Transeuro is a European consortium with a focus on using cells as replacement therapy and is coordinated by a professor at Cambridge University. Their trial remains open but by invitation only according to clinicaltrials.gov. The estimated completion date is 2019.

The Fox Intel Mobile Application Trial (The FIAT Study) was a mobile app with wearable sensors based study in New York for Parkinson’s patients. According to the Fox Trial Finder, the study has been completed. There are open trials across the United States using wearable technology and studying various aspects of the disease; the Fox Trial Finder remains an excellent research to locate the specifics and entry criteria for trials.

Currently data is being collected via Fox Insight which is an online data collection opportunity for people with and without Parkinson’s disease and focuses on real life experiences in their efforts to assemble the largest collection of data as they work toward a cure.

Wearable technology has made a significant impact to gather data via apps. The Apple Research Kit provides a valuable resource for clinical trials and ease of access for scientists, researchers and trial volunteers. Clinical trials for all diseases are always in need of participants whether it be a traditional trial or a trial using wearable technology. The resource site Clinicaltrials is a clearing house type of website with an easily searchable database for clinical trials, the entrance criteria and study details.