Laundry pods are very convenient and very popular. Laundry pods also contain an inherent risk due to their design to young children and seniors. Data has continued to be compiled to reveal the danger of laundry pods for children particularly under the age of six years old. Since this information first began to receive attention in 2015  a few things have changed regarding the manufacturers addressing the safety concerns of laundry pods in the home including voluntary product modifications and guidelines. 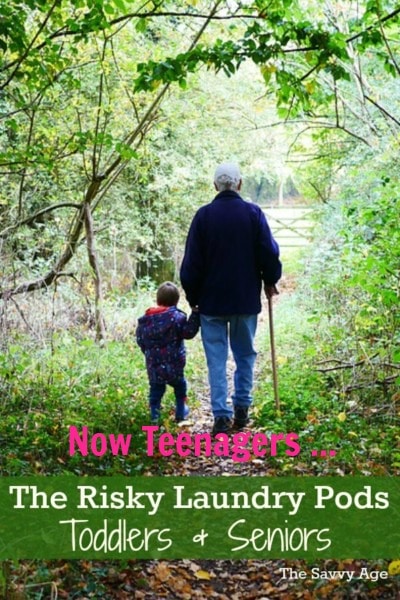 Unfortunately 2018 began with a dramatic increase of visits to emergency rooms for intentional exposures according to the American Association of Poison Control Centers amongst 13- 19 year olds attributed to The Tide Pod Challenge  in which individuals bite into a laundry pod or put a laundry pod into their mouth a with some individuals posting the dare on social media.

In response to the serious health dangers of ingesting a laundry pod, Tide made the following public service announcement with Rob Gronkowski:

What should Tide PODs be used for? DOING LAUNDRY. Nothing else.

Eating a Tide POD is a BAD IDEA, and we asked our friend @robgronkowski to help explain. pic.twitter.com/0JnFdhnsWZ

In 2014 the American Association of Poison Control Centers reported 4,110 people sought treatment due to laundry pods and 59 people became critically ill; more than 10,000 cases were reported in 2017. Children under six years old and younger are the most attracted to laundry pods; one and two year olds are at greatest risk for accidental ingestion of the laundry pod.

Tide has now produced videos on childproofing a home. The Laundry Pod is included amongst household items and situations to childproof a home. The video is at the end of this post.

Why Are Laundry Detergent Pods More Dangerous Than Detergent?

This is a question experts continue to study and have been unable to arrive at  a solid explanation. Historically children have ingested loose laundry detergent which usually elicits mild digestive symptoms; however the composition of the detergent pods can cause much more serious injuries for some children and seniors.

Alleged injuries from biting into a laundry detergent pod include:

Experts remain stymied as to why detergent concentrated in the pod form is posing a significant health risk when ingested. The experts continue to theorize that the design of the pod is inherently dangerous, the high concentration of liquid in the pod, the force of the pod bursting may be the cause,  but have not yet arrived at a conclusion. The pods with liquid cause many more medical problems than the pods with granules according data published in the Pediatrics journal.

Legislators in New York have introduced a bill requiring the design of laundry pods be modified in color and opaque design to discourage ingestion particularly by children. Intentional ingestion of laundry pods is difficult to prevent, but the health consequences can be very serious or dire. The Tide Pod Challenge has been attributed to the spike of intentional ingestion statistics at American Association of Poison Control Centers.

A study published in the online journal JAMA Ophthalmology identified an increase in eye burns due to laundry pods and children. Eye burns in 2012 were reported at 20 increasing to 500 burns were reported in 2015 for preschoolers. Voluntary safety product modifications by the manufacturers were instituted with guidelines from the American Cleaning Institute (ACI.) ACI states the majority of manufacturers changed their packaging by the end of 2016 and the study was performed prior the the packaging changes.

The European Commission has already taken the lead in regulating laundry pods. Effective June 1, 2015 regulations to warn consumers of the risks and modification of the pods became effective.  Manufacturers of laundry pods are required to:

How To Use Laundry Pods

Proctor & Gamble (Tide Pods, Gain Flings), Sun Products (All Mighty Pacs) and Cot’n Wash (Dropps brand) have now stated they will add a bitter tasting coating to deter biting into the pod. P & G has partnered with Safe Kids Worldwide and advises the following when  laundry pods are purchased:

In April 2016 data released from the journal Pediatrics stated:

The data and report was compiled in the Pediatrics Journal is from the National Poison Data System and is available here. The recommendation of the report is clear; Homes with children under the age of 6 should not use laundry pods.