Social media definitely has its’ positives and negatives. It is an ever changing landscape which can make communication quicker and farther reaching than perhaps originally intended. Medicine as well has benefited from social media, electronic health records (EHR) allow patients to access their health records from the comfort of their home with a click of the mouse. 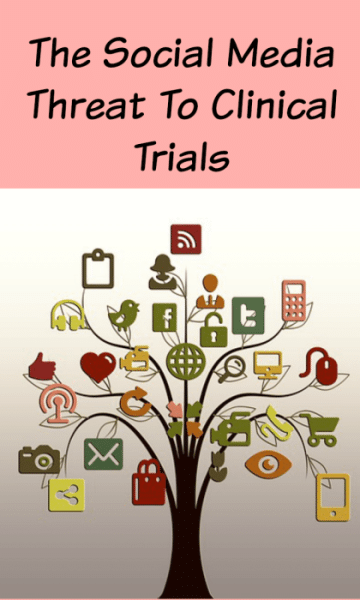 Clinical trials have traditionally held to the standard that the trials be double blind. In a double blind study neither the patient nor the clinician know which patient receives the experimental drug or the placebo. This protocol produces the most effective and reliable results as it removes the perceptions, misconceptions and the power of the mind from both the clinician and the patient regarding the results the drug or the placebo.

As social media has grown so has the propensity of some patients to publicly blog or document their participation in clinical on social media. Clinical patients in the same trial have been documented conferring the specifics of the trial as well as speculating who is being given the placebo. This public documentation has also included describing the internal procedures of the trial, comparing symptoms and then speculation as to how a participant of the trial can determine if they are being given the placebo or the drug.

Due to this behavior researchers, clinicians and drug makers have become increasingly concerned that the social media patients can unduly influence the outcome of the trial, jeopardize the study or unduly influence others in the same trial.

This has presented the proverbial sticky wicket as to how much information is too much information without penalizing the patients’ rights to talk versus jeopardizing a clinical trial. Many clinical trials are now requiring consent forms for drug trials with the social media restrictions of the trial. Restrictions are beginning to constrain the patients’ social media involvement when involved with certain trials. Researchers remain concerned about any issue which would pose an obstacle when seeking approval for a new drug at the U. S. Food And Drug Administration (FDA.)

In 2015 the FDA will be releasing social media guidance documents as the junction of  social media and clinical trials continues to evolve.
Recommended Reading: