Obamacare elicits various reactions amongst Americans. There is no universal agreement, no universal disagreement and no consensus as to why Americans like or dislike Obamacare. I was looking through an old blog which detailed my trials and tribulations of Obamacare beginning in October 2013.

October 2013 was the pivotal month that Obamacare was open for enrollment on the government website healthcare.gov. However the reality was that neither the government nor the website was ready for enrollment in Obamacare. I was pushed into the first wave of Obamacare enrollees because Blue Cross Blue Shield informed me my private pay policy would be cancelled January 1, 2014. This was a policy I had purchased for 10 years; it was not catastrophic insurance. The policy was $1000 deductible, 70/30 co pay traditional insurance. 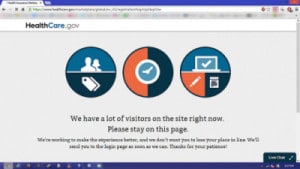 Through the years, the Blue Cross Blue Shield policy has increased in price over 250%; every year I would analyze the insurance plans and decided that for my needs, finances and pre existing conditions I would keep the same policy. I was very familiar with insurance policies and their language; I was not prepared to the journey it would take to keep myself insured as I travelled into the land of Obamacare.

Thus came about a column I had which documented my journey.  I came across the below little ditty I had written in late fall 2013 as us little ole first enrollees still could not access the website.

As winter 2015 rolls along, the website has definitely come a long long way since its inception; and at a great cost, but that is another subject indeed.

Sing along to the tune of Let It Snow….

And when the website finally works,
how I’ll love to see the actual policy;
But if the premiums estimates are right,
All the way to my home I’ll be cryin.