A promising drug remains in development for the treatment of Parkinson’s by Acadia Pharmaceuticals. Nuplazid, generic Primavanserin, is scheduled to be submitted to the FDA in the second half of 2015. The drug has been identified by the FDA as a possible breakthrough therapy. Patient, physicians and stock analysts continue to closely monitor the FDA submission of Nuplazid. 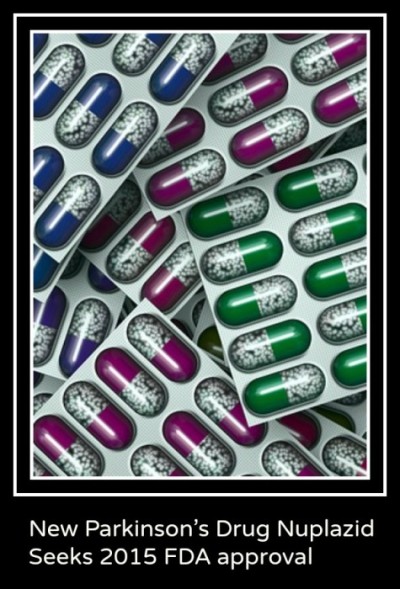 A new antipsychotic drug  Nuplazid, (Pimavanserin, generic Name) has been developed by Acadia Pharmaceuticals, San Diego, United States. This drug has successfully completed the phase-3 trials for Parkinson’s psychosis disorder. Acadia Pharmaceuticals is a firm that is passionate enough and determined toward improvement of life quality of patients who are suffering from various neurological disorders.

MECHANISM OF ACTION, BENEFITS AND CURRENT STATUS OF DRUG

It is a selective serotonin inverse agonist (SSIA) that preferentially targets the 5-HT2A receptor (A subcategory of serotonin receptors) and don’t interact with other receptors like 5-HT2B, 5-HT2C and dopaminergic receptors and prevent various side effects e.g. extrapyramidal effects (comprising irregular muscle movement, irregular muscle tone etc.) that were faced earlier with other antipsychotic drugs usage.

Acadia the pharmaceutical firm is planning now to obtain marketing approval of this drug with the trade name of NUPLAZIDTM from the US Food and Drug Administration (FDA), a regulatory authorities of the United States that is responsible for approving pharmaceuticals products after completion of extensive trials and safety studies ranging from pre-clinical to clinical studies (involving both animals and humans). Every drug have to pass three phases (Phase 1, 2 and 3) successfully for getting approval from regulatory authorities. The most interesting thing about this drug is: FDA has designated Pimavanserin as a “breakthrough therapy” that means this drug is very much beneficial and having positive position in views of FDA.

When Will Nuplazid Be Available?

Currently, the company is planning to submit an NDA (New Drug Approval), after obtaining approval this product will be launched and marketed to help people who are suffering from Parkinsonism-associated psychotic disorders. Acadia is now positioning for a first quarter 2015 New Drug Approval application with the FDA.

Stock analysts are watching the company and the Nuplazid progress as the drug winds its way through the approval process. Information in the J.P. Morgan healthcare conference indicates Acadia is projecting hiring approximately 135 representatives to market the product to 11,000 doctors.

Acadia continues forward with a New Drug Approval application to the FDA; however, the submission has been delayed until the second half of 2015.

Nuplazid has received Priority Review status by the FDA. Decision by the FDA rendered by May 1, 2016.