By the end of 2013, the overall prison population in the US rose to 1,574,700 people which were up about 4,300 from the previous year. The rise has occurred in the state prison systems as the federal population actually dropped for the first time in over three decades.

One of the major issues facing the state and federal prison system is the number of older or senior prisoners who are part of the largest and fastest growing population in prisons today. From 1995 to 2010 the number of prisoners over the age of 55 grew by more than four times. By 2030, they are expected to number 33% of the entire US prison population. 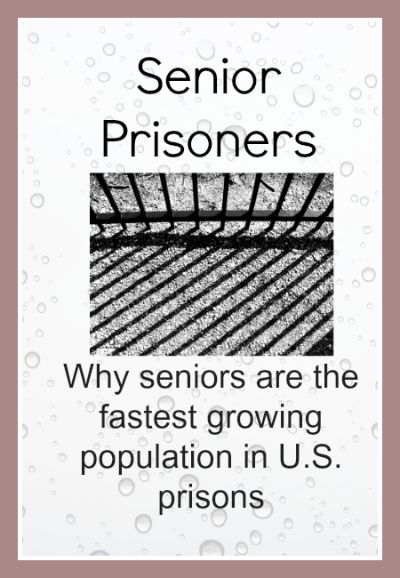 The expansion to one-third the prison population is not because more seniors are being arrested, but because they represent a much larger population group than their younger counterparts. This means that the actual burden may be even greater with fewer people to take care of them behind bars.

The Issues with Eldercare in Prison

With the senior population growing, the prison system at the state and federal level are experiencing costs that are far exceeding simply imprisoning the population. It is this rising cost that may spell the end of the current trends in sentencing and parole for prison populations;

Heath Care: The cost of taking care of elderly prisoners is far higher than younger inmates because they have greater health care costs attached. The elderly are in need of more medication attention, especially as their bodies break down over time.

Prisons are ill-equipped for proper eldercare, but they also are simply not the place for senior prisoners to be. A prison is not meant to be a nursing home as their main focus is to keep criminals from returning to the streets and presenting a threat to the general public.

Cost: An elderly prisoner cost an average of twice as much to take care of compared to their younger counterparts. That adds up to $16 billion each year for the expanding prison population. With these rising costs means that the function of the prison system itself becomes less efficient as more resources are used to take care of the senior population.

Recidivism: There is a natural objection to releasing any prisoner before their sentence has been served. This is particularly true of murderers who many people believe will present a threat to the public if they are let loose again.

However, the recidivism rate for those over 50 is less than 7% and 4% for the elderly over the age of 65. This is a far lower rate than those under 50 where it is close to half of their population. Still, parole boards are very reluctant to let murderers, rapists and others with violent records back out on the street even if they have model prison records.

The fear of backlash for letting elderly prisoners being released on parole has helped fuel the growing cost of the prison system. This reluctance extends to not granting prisoners early release in states where they have what is known as “compassionate release” laws. Laws that were meant to help prisoners with severe medical issues and even terminal illnesses are rarely used to thin the prison population even when the prisoner is physically or medically incapable of committing another crime.

The Increasing Costs of Health Care For Elderly Prisoners

Interestingly enough, the health care costs of prisoners actually declined in the years 2010 and 2011. However, it is expected with the recent expansion of the prison population and the relatively few seniors who are paroled that their health care costs will start to rise dramatically over the next two decades as they age and become more reliant on health care.

In some ways, this is a reflection of the senior population in general. The “Baby Boomers” are the largest single population group in the United States and were born from 1946 to 1964. As the oldest of this generation reaches retirement age and the youngest is now 50 years old, it becomes easy to see that the health care costs of the Baby Boomers will only grow considerably over the next three decades. Add to that the fact that the younger generations are far smaller in terms of numbers and the burden becomes even more apparent.

In addition, studies have shown that a prisoner, particularly one that has been held behind bars for decades is far more susceptible to aging and will have greater health care needs than someone of the same age who is outside the prison system. The environment of prisons helps to magnify the issue the stress and strain of being behind bars weighs heavily on the health of those incarcerated.

The US Prison System Turns a Corner

However, despite the reluctance in general to release senior prisoners, there is a movement afoot to provide compassionate care and to find ways of getting the elderly out of the prison system in general. Through the US Justice Department and certain states are now making it easier to have particular inmates released if they have serious medical issues or are simply infirmed by old age.

This action is may not be driven so much by compassion as it is the practical effect of the cost of eldercare in prisons. There comes a time when the burden of keeping them becomes so bad that billions of dollars are being spent on healthcare needs of elderly prisoners, the time for action become obvious even at the risk of a public backlash.

Although it may seem farfetched to some today considering the current environment concerning releasing prisoners early, the sheer cost of maintaining the elderly prison population will eventually become too much to bear and stronger actions will be taken to relieve the financial pressure. However, like many issues that face the general public, it may take years before any concrete action is taken. By the year 2030 if no actions are taken, the burden to the prison system may exceed the breaking point.