Christmas crafts for the younger kids can be difficult to find! The age between finger paint crafts and crafts which require too many steps or too long of an attention span can be elusive. The Elf Puppet is an old school Christmas craft for younger kids from years ago brought back for a reboot. 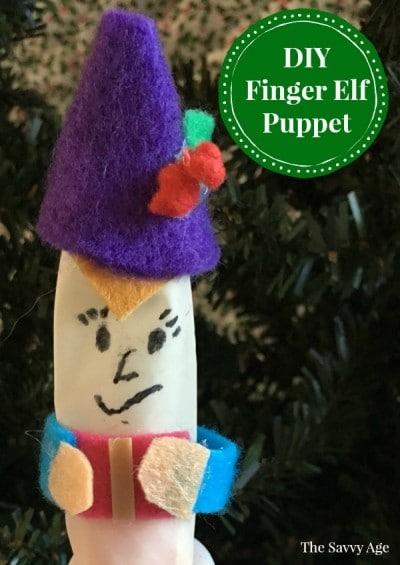 This craft for younger kids is flexible and helps dexterity skills without being too frustrating. The felt pieces don’t have to be perfectly cut, the face doesn’t have to be perfectly drawn as that is part of the charm of the Christmas Elf Puppet. Enlist the crafty grandparents for an afternoon of Elf puppet making and the materials are more than likely already in your home. Or head to the dollar store to find affordable felt and plastic gloves.

How To Make Finger Elf Puppet 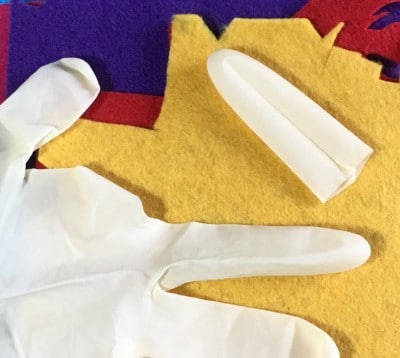 Download the printable pattern (or free hand draw directly on felt). The template is a hand drawing – as you can see the pieces are very small and can be easily cut by hand without the template. The felt does not need to be cut with perfectly straight edges.

Cut out the pieces of the felt elf puppet from the pattern. Your elf can be whatever felt colors you desire! This is a great way to use felt scraps from other projects.

Cur the finger off a plastic glove.

Turn the finger inside out.

Size the length of the plastic glove finger to a “real” finger.

Using the pattern, trace the parts of the elf on the scrap felt and cut.

From the red felt make a berry or two! Cut a piece of red felt, dab glue in the middle and roll in the palm of your hand. The red felt will turn into a ball (berry)

Glue the edges (straight edges) of the hat together to make a cone shape.

Glue hat to the top of the glove.

Decorate the hat by gluing the holly and red berry.

Glue the package to the front of the elf measuring approximately 1″ under the bottom of the hat. 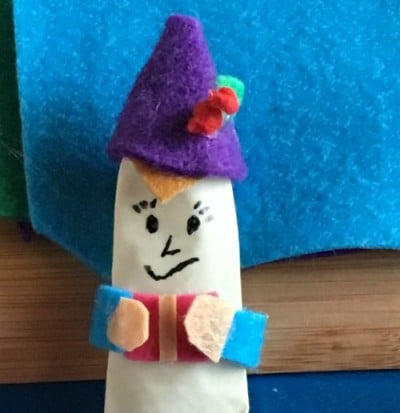 Glue the hands to the edge of the arms.

Glue the arms/hands to the puppet by wrapping the arms around the rear of the puppet and bringing to the front.

Position the hands as if holding the package.

Optional: Add a bow to the package

Draw the face on the elf with a permanent black magic marker.

**Let the magic marker dry so it does not smear ***