Charles the Monarch is the famous Labradoodle who hails from Norfolk, Virginia and occasionally creates a stir when in public.

Charles’s is adorable, Charles garners a second look when walking down the street and Charles resembles a lion. Owned by the Painter family, Charles is the mascot and probably considers himself part owner of the family garden center.

A few years ago Charles created quite a community stir when a bevy of 911 calls reported a lion on the loose. It was just Charles roaming around the garden center.

Since his national debut, Charles has garnered quite a following on his facebook page with 57,736 likes.  Charles is also popular on Pinterest though he must share the limelight with Prince Charles too. I doubt Prince Charles would mind.

When not supporting his look alike, the Old Dominion University mascot, Charles is also quite popular on social media. Charles has his own instagram following which documents all of the places, pets and people Charles has encountered.

A google search of Charles The Monarch reveals that the labradoodles popularity is impressive; he outranks Charles I and Charles II of England as well as Prince Charles.

Charles is clearly no shrinking labradoodle and also became a father last year with his labradoodle partner Samantha. Eleven puppies became part of the Charles and Samantha pride and keeping with the Charles dynasty are quite a popular pride.

Labradoodles Are A Popular Choice 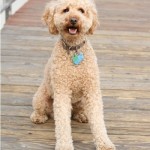 Labradoodles are a hybrid cross between a standard poodle and labrador retriever. The Labradoodle mix is neither recognized by the American Kennel Club or in Australia.

Labradoodles originated in Australia in 1989. It was hoped that the mix would create a coat which was hypoallergenic with the smart aptitudes of each breed to become a guide dog. Since its’ inception, three sizes of Labradoodles have been bred: standard, medium and miniature.

Is The Cashew A Nut Or Fruit?
Bruffin Continues Popularity