Home » Health » Is The Cashew A Nut Or Fruit? 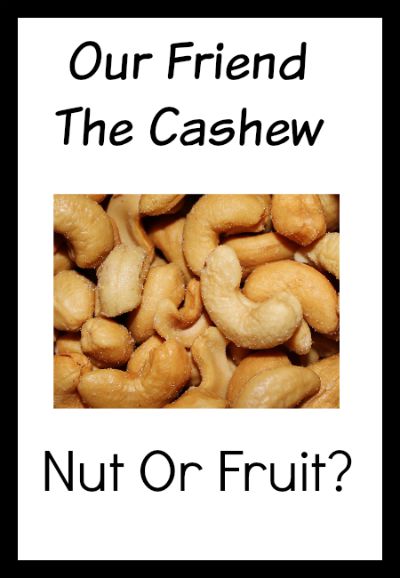 I love cashews, but they can be a very expensive habit of which to partake.

However, the cashews are one of the healthiest nuts for its’ nutritional values. Except the cashew is not a nut.

Who knew? Am I the last to know?

A Cashew Nut Is Really A Seed

The cashew nuts as commonly known are actually a part of the cashew fruit and is in reality a seed. Cashew trees bear fruit called the cashew apple.

The stem of the cashew fruit is the encasing of the cashew nut. The nut is hidden inside a toxic casing which contains cashew balm.

Nutritional Value Of The Cashew

You may have noticed that cashews are always sold pre shelled. The shelling of the cashew is part of what adds to the cost of imported cashews. Harvesting and shelling cashews is labor intensive prior to the cashew reaching the consumer market.

In its natural form, the cashew nut is encased in a shell of which the interior is lined with a caustic balm. The balm is extremely toxic to handle and cannot be eaten. Cashew resin is used to make insecticides, anti termite lumber treatment and varnishes; one can see why the shelling process is crucial for the safety of consumers.

I have eaten many a cashew in my life and it can be frustrating to open a bag or can of cashews and find the cashews are lacking in flavor, taste stale or are brittle. Cashews are much more expensive than their cousin nuts and I expect high quality for the expense.

Germack brand nuts I have found consistently offer quality nuts and nut mixes of all types including cashews. Germack is a brand local to Detroit dating back to the 1930’s and known as the Germack Pistachio Company. The family run company went national in the 1950’s and currently operates its’ nut producing facilities near its’ original location in Eastern Market.

Cashews make an excellent healthy snack or gift for your nut loving friend. A large selection of Germack products are offered at their online store as well.