Home » Lifestyle » What “Up” With The Recalls And Auto Companies? 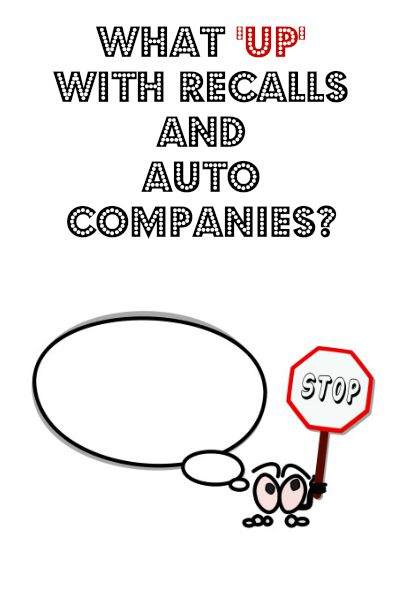 If it feels like everyday a different auto or auto part is recalled, perhaps it is true. Well almost true, certainly we have the daily reports of either a recall or the progress of a recall or the sentiment of … why hasn’t this auto been recalled?

I recently checked in with the National Highway Transportation Safety Administration (NHTSA) on the status of my complaint due to non working headlights. (Hey, who needs headlights to drive?!)

Recalls do seem epidemic of late…

Jeep Carjacking – New spin on the recall … Wireless carjacking. Hackers can remotely kill the engine amongst other exploits. A 1.4 million car and truck recall has been announced. Fiat Chrysler stated computer security measures have been instituted.

GM Cobalt Delayed Recall – In response to the delayed ignition switch recall where the the design of the ignition switch can cause unintended engine shut off and airbags fail to deploy. GM originally attributed 13 deaths to the issue; investigations subsequently revealed a failure to act by GM as a whole and a compensation fund was instituted. As of July 27, 2015 the Fund has approved: 396 total claims, 124 death claims and 269 injury claims.

Takata Airbag Recall – Estimated to affect over 30 million autos made by 10 different manufacturers. Consumers Reports provides an updated and detailed timeline and FAQ.

Toyota Unintended Acceleration – According to Car and Driver, Toyota agreed to pay  $1.2 million for the sticky pedals/floormat issues and delayed recalls along with a three year audit by the federal government.

Where To Check If Your Auto Has Been Recalled?

All you need is the VIN number of your auto to quickly check the NHTSA Safercar website to determine if any recalls have been issued on your auto. The search engine will also provide information on complaints received, but not acted upon by the NHTSA as well as rental automotives.

The Safercar database is the first place I sought information for the Mercury with the non working headlights. The database provided a clue from a prior batch of complaints seven years ago that ‘something was up’ with a faulty LCM on the Mercury Grand Marquis and Crown Victorias. In layman terms, one needs a functioning LCM for the headlights to consistently work. (Guess Ford doesn’t feel providing autos with headlights that work is a safety issue?)

As time has passed, the autos have aged and the complaints have multiplied,  the North Carolina Consumers Council (NCCC) has taken up the cause and requested an investigation be opened regarding the malfunctioning LCM’s.

Ford corporate has not issued a recall for the malfunctioning LCM part. Of course my take on the situation would be that when an auto is manufactured without reliable headlights, this is a safety issue and deserving of a recall.

Instead Ford has issued with the required stipulations, a Customer Satisfaction Campaign with details on replacing the LCM at the dealership. I did not find this to be satisfactory after contacting Ford and the dealership.

Skeptics are not critical of the Satisfaction Campaigns common to all auto companies; however, criticism is leveled at auto companies trying to work their way around  recalls which are much more costly by issuing the satisfaction campaigns instead of a recall.

Second bottom line: Wouldn’t it be a nice change of pace to purchase an auto that does not require a recall?

Why Looking For A Pinterest Group Board Is Like A Root Canal
Seniors – Are Your Vaccines Up To Date?