The United State Supreme Court began hearing oral arguments for Tibbel v. Edison International on February 24, 2015. This is an important case for senior citizens with private pension plans due to the implications of the case in relation to ERISA and how companies administer private pension plans.

In Tibbel v. Edison International the plaintiffs are asserting that Edison did not fulfill its’ fiduciary responsibilities as defined by ERISA. It is asserted that the mutual funds in Edison’s 401(K) plan had higher administrative fees than other equal plans which could have been chosen.

The Employee Retirement Security Act (ERISA) is a federal law enacted in 1974. The intent of the law is to set a minimum threshold of standards companies in the private sector use for the administration of pension plans.

ERISA became effective for pension plans beginning on or after January 1, 1975. The law contains very specific rules for the plans including: how the plan is funded, vesting, eligibility requirements, fiduciary responsibilities and benefits. 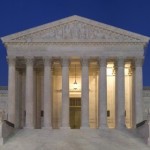 The main question in Tibbel v. Edison International is the period of responsible pension plan administration as required by ERISA. ERISA requires adherence to responsible management of a pension plan for six years or less in the current plan.

The progression of the Tibbel v. Edison International and its’ possible impact upon seniors can be followed online at scotusblog, official blog of the United States Supreme Court.

AARP Foundation Litigation (AFL) has filed a Friend of The Court brief in support of the plaintiffs for Tibbel v. Edison International.  AFL monitors and supports issues throughout the country which affect individuals 50 years and older. The legal initiatives by the AFL in state and federal courts promote its’ mission statement of being a legal advocate for the issues of hunger, income, housing and isolation.