Unpaid family caregivers comprise over 34 million caregivers in the United States for adult family members over the age of 50. This has gained the attention of the presidential candidates and political parties as the population is continuing to age and demand for care will continue to increase.

Where are the presidential candidates on supporting the unpaid caregivers in the United States? As of today we have two candidates standing … 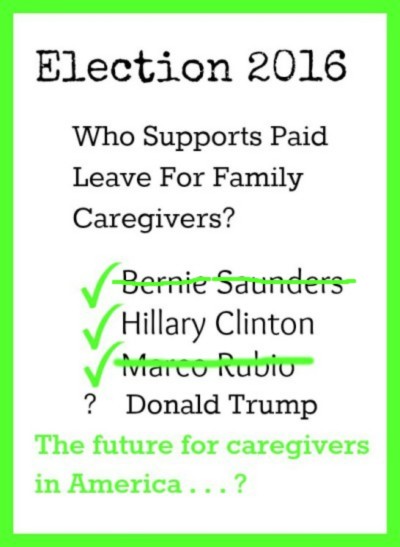 Candidate Hillary Clinton has received much press over her proposal for paid family leave vs. family leave.  Clinton’s proposal minus how this would be financed is:

Up to 12 weeks of paid family leave

Cost to be borne by wealthiest taxpayers, exact details unreleased to date

Candidate Bernie Sanders also supports a minimum of 12 weeks of paid family leave up to 3 months. The leave would be supported by payroll taxes which is estimated at $1.61 per week per person.

Tax credit for businesses. The 25% tax credit is non refundable and businesses must provide

Remains unclear at this time.

Cost Of Caregiving & In Home Caregivers

This may very well just be election rhetoric or politically correct discussion, but will an issue which affects so many Americans actually receive the attention and perhaps assistance from the government in 2016? Or 2016 and beyond?

The AARP report Caregiving in the U.S.  published in June 2015 provides an overview of all aspects of caregiving. While full of statistics, the report offers a glimpse into caregiving and the future of caregiving.

According to a Metlife study, the financial cost for caregivers remains high. Costs which could be reduced and assisted by an expansion of the FAMILY Act or assistance by the laws of the government. Irrespective of ones’ political affiliation, the medical costs associated with any illness or age related condition are high as well as the financial cost of caregiving for a family member.

The Future Of Caregiving

If this is an issue on your radar for the upcoming presidential election, please be aware of the proposals by your candidates. Of course, proposals are not reality. The reality remains that unpaid family caregivers do deserve a seat at the table this election.

The law became effective May 4, 2016 and affects employers with over four employees.