Nuplazid, a  promising yet unapproved drug for Parkinson’s disease has been granted Priority Review status by the Federal Food & Drug Administration (FDA) in November 2015. The FDA’s Priority Review designation is significant as a decision by the FDA will now be granted by May 1, 2016; priority review designation fast tracks a drug’s approval process through the FDA for drugs. 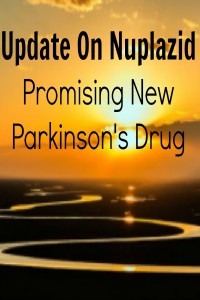 If approved, Nuplazid would be the first FDA approved drug to treat Parkinson’s Disease Psychosis (PDP.) The main symptoms of PDP include hallucination’s and delusions which cause significant impairment and distress for the patient and family. It is estimated over 50% of Parkinson’s patients will develop PDP during the course of the disease.

If approved, Nuplazid would be the first FDA approved drug for Parkinson’s patients. The drug is a selective serotonin inverse agonist (SSIA); one of the most promising aspects of Nuplazid is the positive effect on treating hallucinations and delusions without impairing the already compromised motor functions of Parkinson patients. Additional clinical information for Nuplazid is available here.

The High Cost of PDP

Acadia Pharmaceuticals (ACAD) is the manufacturer of Nuplazid.

I will address my views and experience with black label or off label uses for drugs as a caregiver for Parkinson’s PDP patients in a future post. Just as each Parkinson’s patient differs so does each caregivers’ experience, I am heartened to see possible progress in treating Parkinson’s PDP.