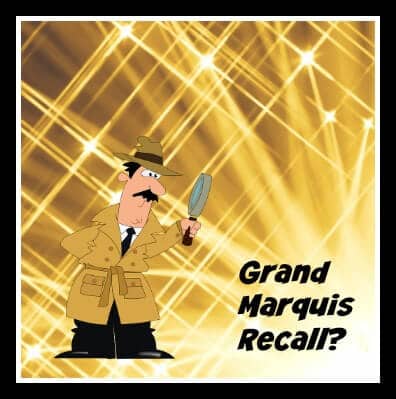 I should add before anyone is worried I actually drove without headlights, I did find a way to jury rig a system. I discovered the high beam lights worked, the headlights did not. So by pressing and holding the flash to pass lever, the high beams would stay on. This of course required I drive with one hand as the other hand was occupied trying to keep the high beams on.   I don’t recommend that either. And the dog (in a seatbelt) riding shot gun, he wasn’t amused, bemused – but not amused at all of the commotion.

And I apologize to all those oncoming drivers I tried not to blind with the high beams. I did try to drive a low traffic route to be courteous of all, but I figured a car with high beams is better than a car with no headlights in this circumstance.

So why you ask did I drive home without working headlights?  What began as a headlight problem has turned into another case of a car company not formally issuing a recall. Apparently Ford believes working headlights are not a safety issue which warrants a formal recall?

As many Grand Marquis and Crown Victoria owners have come to discover, the headlights are not reliable in the 2003-2005 models. There is a defect in the Lighting Control Module (LCM) which controls the headlights. The quirk is that while the headlights do not work, the high beam will work if you continuously hold the flash to pass lever.

The National Highway Traffic Safety Administration (NHTSA) has received numerous complaints throughout the years. Car forums on the internet are filled with reports of Grand Marquis and Crown Victoria owners and their stories of the failing headlights. Many of these owners allege the headlights failed while the car was in motion. The same owners report the problem was linked to a faulty solder on the LCM after their mechanics, at the owners expense, diagnosed the problem. Dealerships have been reported to charge $600-700 for LCM repairs; however a non dealership will fix the issue for much less.

I own a Grand Marquis 2003 with failed headlights.

Why wasn’t I notified of this issue?

Really? What is a 12N01? I have no notification of either the headlight problem or a customer satisfaction campaign 12N01 bulletin. This is a single owner Grand Marquis 2003. 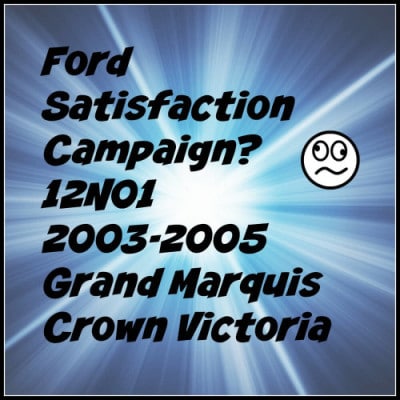 A customer satisfaction campaign is frequently called a silent recall or a secret warranty. Very secret, very stealth in my experience. Car companies issues these campaigns in lieu of a formal recall. Apparently Ford issued in 2014 the Customer Satisfaction Campaign 12N01 and 14N01 which extends the warranty to 15 years or 250,000 miles on vehicles with the affected LCM’s.

That is nice. I repeat the question.

Or is it the number of cars affected is too small at 517, 945 vehicles to warrant attention by Ford? The targeted demographic for the Grand Marquis and Crown Victoria are mature drivers and the police. Do those two groups not need working headlights? I suggest corporate Ford would not let their family members drive a Ford car without reliable headlights. Do consumers not deserve the same care and attention?

The NCCC has petitioned the NHTSA Office of Defects Investigation due to the complaints and seven vehicle crashes attributed to the LCM failure. Read the letter to the NHTSA by the NCCC here.

According to the documentation and acknowledgement of the Ford customer satisfaction campaign 12N01,  the NCCC states that dealers are reporting the LCM is not available and Ford customer representatives cannot advise as to when and if a replacement part is available. The NCCC is also asking that all vehicles with the LCM part be investigated as to the integrity of the LCM.  The NCCC notes the rate of failure is increasing as the vehicle ages.

History Of The Headlight Failure

In 2008 an investigation was opened with the NHTSA due to complaints filed due to reports of intermittent headlight outages, dimming of the lights or complete headlight failure. A thumbnail of the investigation:

Investigation was closed March 24, 2009 as the NHSTA (Action number PE8066) determined a recall was not warranted; however the NHTSA stated while the investigation is closed it does not find a safety related defect does not exist.

The Grand Marquis is currently at the mechanic. Obviously until I began researching the problem I was unaware of the stealth 12N01 bulletin or the 14N01 bulletin for my VIN number.

I will be calling Ford to see if I can obtain this stealth service bulletin. I will be adding my complaint to the NHTSA database.