“‘In the continuing saga of the Grand Marquis with no working headlights which began earlier this week with a drive home without headlights (which I reiterate I do not recommend) at the top of my action list was to contact Ford. Research on the internet provided a wealth of information regarding a defective part on the 2003-2005 Grand Marquis and Crown Victoria. 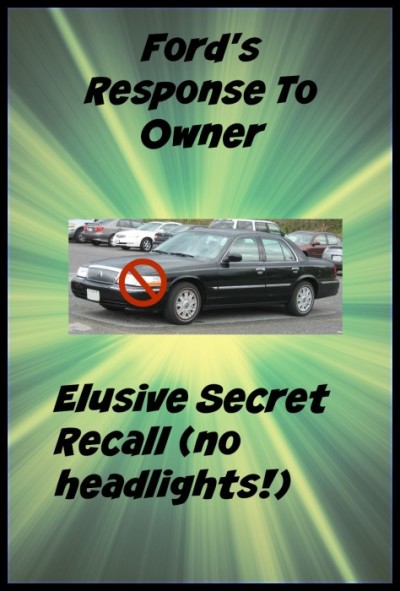 A petition to investigate the faulty LCM switch which provides consistent headlight operation has been opened at the National Highway Transportation Safety Administration (NHTSA) by the North Carolina Consumers Council (NCCC) as of April 1, 2015. The petition references Ford Customer Satisfaction Campaign 12N01 where Ford has extended the warranty on affected models; the NCCC is requesting an investigation to prompt a safety recall.

The car in question for our household is a single owner Grand Marquis 2003, 51,000 miles with non working or intermittent headlights. This issue has occurred multiple times over the life of the car until the incident earlier this week in total failure. And indeed I did contact Ford.

Ford’s Response To My Inquiry 14N01

I contacted the Ford customer service call center to inquire as to the LCM issue on my vehicle. After checking the VIN, the representative stated the Grand Marquis is associated with Customer Satisfaction Campaign 14N01. This campaign extends the warranty for 15 years or 250,000 miles on the car for the LCM.

The representative stated, “Notices were mailed in April 2014 and usually a follow up notice is mailed six months later.” Either way, we did not receive a notice.

The representative said, ” no.”

“Correct,” she replied. She stated, “This is a call center and cannot provide the document.”

I asked again, so Ford corporate will not provide a copy the now elusive 14N01.

“Correct.” she replied and referred me to a dealer.

I asked if a dealer will email me a copy of the becoming ever elusive 14N01; she offered a number to the closest dealer.

I wasn’t amused by the response and thought that is absolutely ridiculous.

And I contacted the service department of the dealer. After reviewing my problem with the no headlight issue, I asked for a copy of 14N01.

The dealer stated no, I would need to come into the dealer to obtain a copy.

I asked if the LCM were in stock. Yes, in stock.

The dealer reported the repair, IF the dealer diagnoses the repair is needed due to a faulty LCM, would require leaving the car for two days.

Two days? I stated Ford is estimating the repair at 1/2 day.

Dealer stated the part has to be ordered; I asked if the LCM could be ordered prior to bringing the car in to expedite the process.

The dealer said no, they have to diagnose the issue.

I stated this is a long standing issues consistent with all the other LCM failures on the Grand Marquis.

I stated this is a safety issue which deserves immediate attention; at least in my realm, no headlights is an immediate problem and safety issue.

I asked the dealer if a loaner would be provided? Dealer said no.

No thanks to Ford or the Ford Dealer, I did find a copy of 14N01 on the internet and in the NHTSA database. For consumers, this alleged customer satisfaction campaign is elusive, stealth, hidden; which is why these bulletins are called silent recalls or secret warranties.

It is also cost effective for the manufacturer as secret warranties are much less expensive than a formal recall.

However, per the vehicle recall guidelines of the NHTSA, lighting failures qualify as a safety recall. The 2003-2005 Grand Marquis and Crown Victoria vehicles should be recalled.

Yes, Ford you should care. You should do right by your customers.

In 2012 Ford changed its branding and advertising to ‘Go Further.’ Go further? Really? I know I won’t be able to ‘Go Further’ in Grand Marquis with a failed LCM. Unless I want to be acrobatic again and hold the flash to pass lever with on hand while navigating the wheel with the other hand.

Why? Because that is the ethical course of action.

Why? Because if the Ford ‘Go Further’ campaign is trying to instill faith and brand loyalty, issuing a safety recall instead of a stealth customer satisfaction campaign would indeed be going further.

The NHTSA maintains a database where car owners can search via the VIN. This is not a guarantee; but a wealth of information does exist on the site. Additionally once your VIN is entered, an option exists for the NHTSA to notify you of new information regarding your vehicle.

Recommended Reading: Driving the Grand Marquis With No Headlights!