Twenty two years to make the perfect calamari? Who said chefs aren’t perfectionists! The memoir 32 Yolks: from My Mother’s Table To Working The Line by Eric Ripert does tell the tale of a world renowned, some might say beloved chef,  from a very challenging childhood through his progression and James Bears winning chef of New York City’s La Bernardin restaurant.

I found the most interesting chapters detailed his experiences in the kitchen and progressing through the culinary ranks. The challenges, the tantrums, the intricacies of being a chef and the cooking personalities which rule a successful kitchen at a well regarded restaurant. For those who dream of owning their own restaurant or contemplating culinary school 32 Yolks would be a wise read indeed. 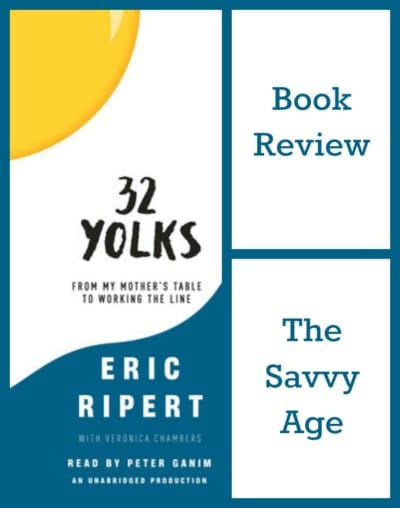 I first became aware of Ripert by watching Top Chef and the food reality shows. I had heard of his restaurant, but not living where his restaurants are located, I did not pay much attention. I did pay attention to his smooth delivery and cool yet warm demeanor on television; after reading his book one can appreciate how far Rippert had journeyed from a dish throwing tantrum prone chef to his demeanor today.

The Significance Of 32 Yolks

As an amateur foodie I had no idea why the memoir was titled 32 Yolks ; however I suspect those in the culinary world knew immediately the significance of 32 yolks. At one of Eric Ripert’s first jobs at a three star Michelin restaurant he was given the task to make hollaindaise sauce and failed miserably. It was an Aha moment for Ripert to realize how difficult it is to make a perfect hollaindaise sauce which required 32 yolks and that his journey would be long.

Excellent Gift For A Foodie

Any foodie whether amateur or more advanced would appreciate 32 Yolks as a gift. Reality, humor, personal growth in a warm embracing tone captures the reader and carries the reader along Ripert’s culinary journey.

I received this book from the Blogging for Books program in exchange for an unbiased review.