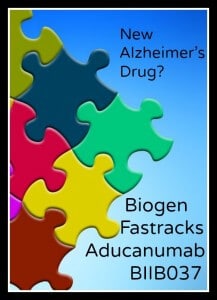 The results of a very promising drug trial by Biogen  to treat Alzheimer’s disease was presented at the 12th International Conference on Alzheimer’s and Parkinson’s Diseases and Related Neurological Disorders in Nice, France today. The conference is meeting March 18-22, 2015.

Biogen Idec is the manufacturer of Aducanumab or BIIB037. Neurimmune is the Swiss biotech which originally developed the antibody.

The Biogen Phase 1b Trial

Participants in the Phase 1b trial were sectioned into five groups. Four groups received a placebo and the fifth group received aducanumab. One of the criteria for participation in the trial was that participants had been diagnosed with mild Alzheimer’s disease.

The results of the Phase 1b trial has sparked the fast tracking of the trial to Phase 3 with the expectation that clinical enrollment will begin later in 2015.

The Federal Food and Drug Administration (FDA) will need to approve the parameters of the trial before participants are solicited.

What Is Aducanumab or BIIB037 ?

Aducanumab is an antibody which is taken from healthy donors. The donors are older people with normal cognitive abilities. It is theorized that the donors have immune systems which are resistant against Alzheimer’s disease.

The drug administered in the Biogen trial was dose and time dependent and produced results which showed a reduction of the amyloid protein. Amyloid protein or plaque is believed to accumulate in the brain of Alzheimer’s patients and contributes to the effects of the disease and subsequent clinical decline.

Alzheimer’s disease continues to be underreported. Currently it is estimated that the disease affects five million Americans; a projection using 2010 Census numbers estimates 14 million Americans will be affected by 2050.

Facts and figures for Alzheimer’s disease as provided by the Alzheimer Association are disconcerting. The disease is attributed as the sixth leading cause of death in the United States with an estimated one in five dollars of Medicare expenses being spent on Alzheimer’s or a dementia related disease.

Funding continues to be an issue. For 2015, $638 million dollars has been allocated for Alzheimer’s research; however, researchers and scientists state $2 billion dollars a year is necessary to reach the ideal goal of finding a treatment by 2025.

Glen Campbell’s journey documented his journey to raise awareness and funding of Alzheimer’s.