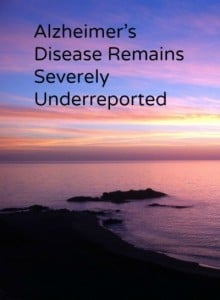 One of the areas which may also contribute to the underestimating of the Alzheimer’s as a cause of death is the requirement that death certificates list one major cause of death. Contributing factors can also be listed; however are not frequently listed. For example in instances where a medical examiner does not know the history of the patient; pneumonia would be listed without mention of Alzheimer’s.
The cause of death of an Alzheimer’s patient may be listed as pneumonia or heart disease; however, in reality the Alzheimer’s disease was the main and not the contributing factor. However it is the gestation of Alzheimer’s over time which may be the actual cause as brain functions diminish which can lead to nutritional issues. Swallowing can be comprised, difficulty eating or drinking can lead to malnutrition or dehydration. Pneumonia or aspiration pneumonia is always a high risk if a persons’ swallowing is compromised.

The results of the study are not necessarily surprising to researchers or the medical community which always suspected that Alzheimer figures were underestimated. The study further emphasizes that as a cure is not available for Alzheimer’s and very few effective treatments exist, the disease is pervasive in the severity of which it affects the entire body and the medical consequences. Alzheimer’s continue to be a devastating battle for the patient and family and it is hoped studies such as these will continue to increase the awareness of disease while researchers continue their battle for the research funds needed.

If the results of this study are used to calculate deaths attributed to Alzheimer’s, the CDC states 83,494 deaths in 2010 were from Alzheimer’s. This study would indicate approximately 500,000 deaths in 2010 were caused by Alzheimer’s. As the population continues to age and cost of care increases, the financial aspect for the caregivers and health system are factors to take under financial consideration. In 2013 Alzheimer’s care cost  $203 billion dollars. It is expected those costs to rise past $1 trillion by 2050. A study, Alzheimer Disease In The United States (2010-2050) was performed using figures from the 2010 census. The study  projects the number of Alzheimer’s patients to reach 14 million by 2050.