Wearable devices continue their popularity as the demand grows and consumers await the release of the highly anticipated Apple smartwatch in April. What was once a pedometer to measure steps has evolved into products such as the Fitbit Flex Wireless Activity + Sleep Wristband, Black

and wearable devices that track movement, exercise, heart rate, sleep patterns, calories, food intake and exercise schedules. One of the benefits of wearable device technology is the ability to gather medical and research data on patients to further research of diseases with the data provided by a wearable device. 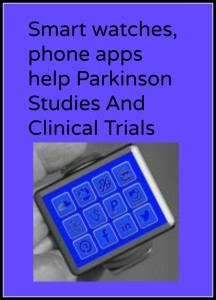 The Michael J. Fox Foundation (MJFF) has partnered with Intel to research three wearable devices to monitor the frequency of movement, the speed of movement, effects of drug therapy on movement, tremor episodes and length among other types of data. The data will be compared to patient logs and the hope is  a greater depth of objective information to help in the management of Parkinson’s symptoms. Doctors hope to gain a broader understanding of the movement issues a patient experiences 24 hours a day with the data along with the patient diaries and office exams.

The Fox Intel app (FIAT ) is one of the devices being studied and trials have begun in New York City. Interested applicants can click here for further information. The Fox Trial Finder has additional wearable device trials listed which usually involve a smartphone or smartwatch to collect the data.

Clinical studies remain a vital tool as scientists and researchers attempt to find a cure for Parkinson’s while improving upon treatment protocols. The Fox Trial Finder is a web based tool which matches volunteers to clinical studies not only in the United States but across the world. Clinical trials need volunteers with and without participants continually. The Fox Finder details the trial, the health parameters of the participants and the recruitment information.