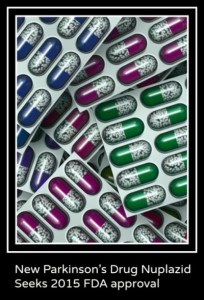 A promising drug remains in development for the treatment of Parkinson's by Acadia Pharmaceuticals. Nuplazid, generic Primavanserin, is scheduled to be submitted to the FDA in the second half of 2015. The drug has been identified by the FDA as a possible breakthrough therapy. Patient, physicians and stock analysts continue to closely monitor the FDA submission of Nuplazid. NUPLAZID (PIMAVANSERIN) DRUG TRIAL A new antipsychotic drug  Nuplazid, (Pimavanserin, generic Name) has been developed by … END_OF_DOCUMENT_TOKEN_TO_BE_REPLACED