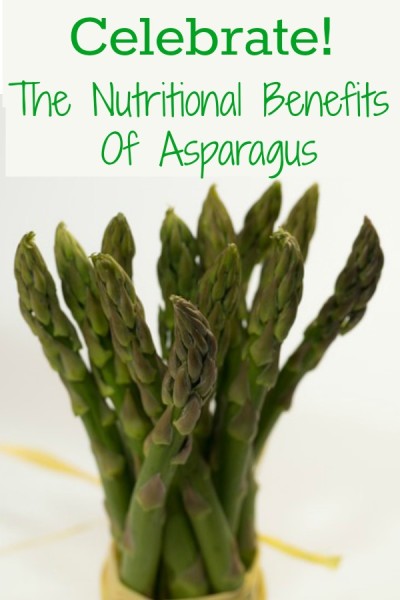 The health benefits of asparagus include:

Easy and quick to cook, grill, marinate, steam, stir fry or can be served raw, this versatile vegetable  is celebrated throughout the world with its’ own festivals.

Asparagus is comprised of 93% water. It is very low in calories (approximately 20 calories in five spears), low in sodium, high source of Folacin, has zero fat, and zero cholesterol.

The perennial question arises regarding peeling the asparagus. To peel or not to peel?   It is personal preference as to if one peels asparagus prior to serving and peeling is not required.

Asparagus in the United States asparagus is usually green, but can also be white and purple. Asparagus in Europe, specifically Spain, France, Belgium, Germany and Switzerland is white. It is called ‘edible ivory’, ‘white gold’, or the ‘royal vegetable.’

The white variety is reported to be less bitter and more tender than the green version. Purple asparagus has a higher concentration of sugar and is hence sweeter than the white and green varieties. The purple hue generates from the anthocyanin in the spears; anthocyanin’s are reported to have anti-inflammatory and anti-cancer properties.

Purple asparagus originated in the Albenga region of Italy. It was named Violetto d’Albenga.

Gardeners should keep in mind that asparagus is a very nice companion vegetable for tomatoes.

A common foe of growing asparagus is the asparagus beetle, the Crioceris asparagi. Is there nothing more irritating than nurturing a garden only to have a bug infestation. The tomato plant is an excellent companion to asparagus plants as the tomato plant naturally repels the beetle.

Tips for Asparagus Purchase and Cooking

As with any other purchase of fresh produce, the fresher the better is the phrase that rules. Check for spears that are firm; avoid the floppy asparagus stalk.

Store the asparagus in water.

Generally it is recommended to wash the asparagus prior to cooking. Clearly unless you grow the produce yourself, its’ history is unknown.

Stand the stalks upright just as you would put flowers in a vase until ready to cook. One of the easiest ways to cook asparagus upright is with an asparagus steamer or vegetable cooker.

What Part Of Asparagus Do We Eat?

The asparagus tip is highly prized for its taste and tenderness. The feathery end is removed from the tougher stalk by either snapping or cutting from the end of the white stalk.

Asparagus is very versatile and can be cooked in a variety of methods with a variety of accompaniments. Popular cooking methods include: steaming asparagus, microwaving, baking, grilling, roasting, blanching, sautéing, broiling and stir fry. Garlic, parmesan cheese, lemon juice, vinaigrette, pepper, salt and olive oil are frequent companions to bring out the best flavor in your asparagus.

This vegetable is so versatile  there are a few cookbooks dedicated exclusively to this nutritious vegetable:

From Asparagus To Zucchini Guide To Cooking Farm Fresh