The superbug CRE dominated the news and unfortunately superbugs continue to be a threat worldwide. Where have we been? Where are we going with the antibiotic resistant superbugs? And now a new superbug mcr-1 has been discovered in China and Canada.

The Lancet Infectious Diseases reported in late 2015 that a new superbug has been discovered in China. The mcr-1 is a colistin resistant gene; significant because the superbug is carried in the mcr-1 gene and easily transferable between genes. Superbugs are highly resistant to antibiotic therapy. 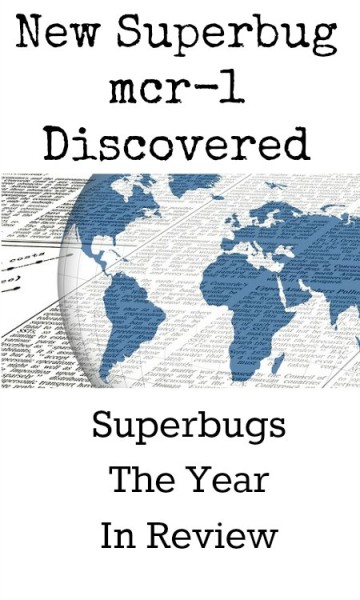 The use of treating agriculture with antibiotics is prevalent in China as China continues to be one of the world’s largest users of the polymyxin class of antibiotics which includes colistin. Colistin is an antibiotic of last resort for superbugs; hence if an animal is carrying the colistin resistant gene and enters the food chain, the clostin antibiotic resistance would be consumed and linked to colistin resistance in humans. This scenario could become a global health threat for humans.

The mcr-1 has also been discovered in Canada and other European countries which have led scientists and researchers to suggest that the use of colistin resistant  antibiotics in livestock be curtailed.  Antibiotics are used to fatten up livestock in many countries.

The Los Angeles outbreak of carbapenem resistant enterobacteriaceae (CRE) in early 2015 was linked to the gram negative bacteria residing on an infected duodenoscope also called an ERCP endoscope. An ERCP procedure  is used to evaluate or treat problems with the pancreas, bile ducts, cancer, gallstones, insertion of stents.

For a detailed review of gram negative and gram positive superbugs, click here.

As a result of the Los Angeles outbreak and other CRE outbreaks across the United States, the Federal Food and Drug Administration (FDA) issued final guidance rules regarding the cleaning and disinfecting of endoscopes and duodenoscopes which have been linked to the  CRE outbreaks. Federal funding has been increased to study antibiotic resistant bacteria and the CDC has requested funding for State Antibiotic Resistance Prevention Programs and additional support to the 10 regional labs used if an outbreak occurs.

For a review of the FDA guidance to prevent CRE infections, click here.

Guide To Restaurant Apps
Does Your State Tax Social Security Benefits? The ‘Lucky’ 13