Have you missed your favorite impatiens? Have you noticed impatiens are making their way back into the garden centers this spring?Do the words Impatiens Downy Mildew sound familiar?

I know I missed my friend the impatiens. But Downy Mildew also infects our vegetable friends cucumbers, curcurbits (gourds), basil. New Guinea impatiens are not affected by Downy Mildew. 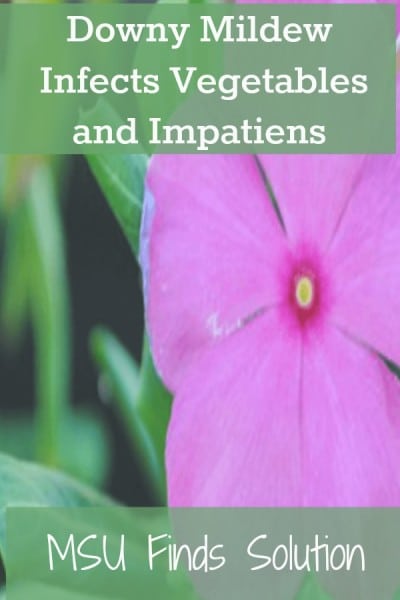 Impatiens were always a ‘go to plant’ for shady areas and offered a variety of colors. Happy foliage, happy flowers make a happy gardener. This is true particularly in the northern United States where the selection of garden plants are limited due to the climate and sustainability with varied temperatures and an unstable growing season.

A few years ago our area was struck with an infestation of Impatiens Downy Mildew. Our impatiens wilted and met an early demise. One of the most noticeable symptoms was the white powdery mildew which appeared on the leaves. Garden centers pulled the plants and it has now been a few seasons since impatiens have been offered.

However, Michigan State University (MSU) a land grant university has taken on the pesky Impatiens Downy Mildew and developed a downy mildew treatment to help control the problem. Working with greenhouses and growers MSU  has now found a solution so we can reintroduce impatiens to the garden and landscape.

What Is Impatiens Downy Mildew?

Impatiens Downy Mildew (Plasmopara obducens) is a fungus also known as a water mold.  The spores are spread through the wind and water and survive winter. The spores hardy survival is one of the toughest challenges in the management of the disease. Infected soil will reinfect healthy plants due to the manner in which the spores are easily spread and are contagious.

This years’ El Nino has brought conditions ripe for the infestation of downy mildew. Grapes, melons, cucumbers and squash are targets for downy mildew. It is important to note that while downy mildew is extremely contagious the disease is host specific; the disease does not spread between different types of plants and vegetables.

MSU took on the challenge of developing a treatment protocol for the disease. The plan begins at the greenhouses with a specific schedule of fungicides considered ‘environmentally safe.’ The powdery mildew fungicides are considered a low risk fungicide which is safe for bees and gardens. While not a permanent solution, the protocol should prevent infected plants from making their way into the market and protect the plant through the growing season in the northern United States.

Impatiens fans will notice impatiens have reentered the garden centers at many locations; however there remain sellers who choose not to offer impatiens and recommend alternative plants.  It remains a buyer beware situation if Downy Mildew is in your area.

Suggestions by MSU if you decided to plant impatiens this year include:

Michigan State University offers diagnostic services for plants and pests. A nominal fee is charged for the identification of an issue, diagnosis and recommendation for control. Samples can be dropped off at MSU or sent to MSU by mail.

Weeds, plants, nematode analysis, problems linked to arthropods (insects) and pathogens (fungi, bacteria) are a few of the specialized services offered by MSU.  MSU has been a leader in the fight against Impatiens Downy Mildew and continues the battle.

MSU and five other universities have been awarded a $2.3 million over the next four years to develop management protocols with an emphasis on early detection. Downy Mildew has existed for over 120 years but it was not until 2004 that the disease became unmanageable in part due to the resistance the fungus developed to fungicides.