How did I miss this information? Who’s been hiding umami the fifth taste?

The traditional four tastes we are all familiar with are the tastes of salt, sweet, bitter and sour. However a fifth taste actually exists called umami, the literal translation is pleasant savory taste. The taste of umami the fifth taste is subtle because umami blends with the other tastes to enhance the total flavor of a food. 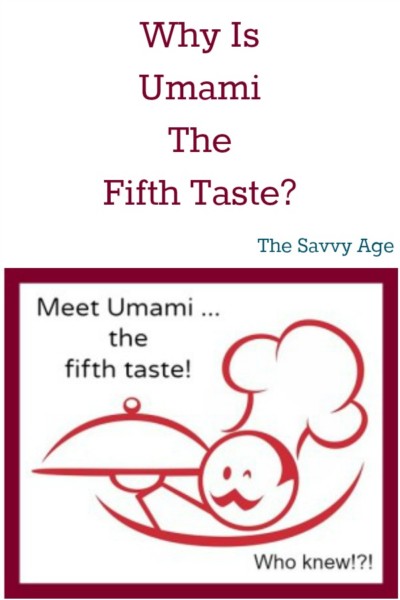 Technically the umami taste occurs due to the amino acid glutamate and ribonucleotides which occur naturally in foods.

The fifth taste is umami which was first identified by Dr. Kikunae Ikeda of Toyoki Imperial University in 1908. Dr. Ikeda studied dashi stock made from kelp and discovered the active glutamate amino acid in the kelp for which he named umami. The same flavor is shared by foods with a savory flavor that could not be characterized as solely sweet, salty, bitter or sour.

Studies in the 1980’s confirmed umami as a fifth taste and its’ acceptance on an international level.

When foods age, such as cheese and steak they undergo a molecular change which brings out the taste of umami. Popular foods rich in umami are:

Entire cookbooks are dedicated to cooking with umami as well as a Japanese website which has annual conferences on umami. Michele Tam is a chef, foodie and blogger and as been described by the New York Times as the “Martha Stewart of Paleo.” Paleo is an approach to eating which embraces whole and unprocessed foods and of course what is in Ms. Tam’s cookbook, umami! Many of the dishes she prepares contain umami rich foods.

The very popular cookbook is titled Nom Nom Paleo: Food For Humans by Michelle Tam and Henry Fong and was published in 2013.

The book contains over 100 recipes along with beautiful photographs and step by step images plus a sense of humor.

I love a cooking book with step by step instructions and photos of the finished product. I do like to know what I am aiming for when finished for us recipe novices. The recipes are not only Paleo friendly but gluten free and the book has over 1000 very appreciative reviews.