Home » Finance » Medicare Codes Change And How It Affects You 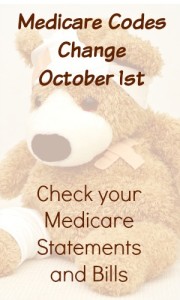 As of October 1st, 2015 the diagnostic codes for Medicare increase in number from 14,000 codes to 70,000 codes. The International Classification of Diseases (ICD-10) has been updated and is the diagnostic bible for doctors and hospitals whom classify your illness with a code which then corresponds to payment by Medicare.

As we know the key to having your Medicare claim paid and in what amount can be the infamous ‘code.’

What Is The ICD-10 and How Does It Affect My Medicare?

The ICD – 10 is an update upgrade of the diagnostic medical procedure coding system. Prior to October lst, 2015 hospitals and doctors used the ICD-9 which was last updated in 1979. Obviously many of todays’ diseases such as the superbugs and Ebola were not included in the ICD-9; it is also projected that increased specificity in the coding will generate a wealth of data which would eventually assist a transition to a value based payment plan by Medicare to hospitals and physicians.

How does the ICD – 10 effect Medicare payment?

While the ICD-10 was officially adopted October 1, 2015 in reality October 15, 2015 is the date patients should take extra consideration when reviewing their Medicare bills and payments. It takes a minimum of two weeks for Medicare claims to be processed; therefore, the new codes will become evident on your Medicare bill October 15, 2015.

A 12 month grace period has also been granted by Medicare as physicians and hospitals transition to the new system.  Hospitals have a separate ICD-10 to bill procedures that the hospital version of the ICD-10 is expanding from 4,000 to 72,000 codes.

Why Should I Be Aware of the Medicare Codes?

Because the Medicare code equals money. Money for all participants whether it be a hospital, patient or physician. One of the advantages of the new coding system may be a reclassification of an illness into more severe category. More codes equals more categories. If last year illness A was classified as 123.45 but in 2015 is classified as 223.45 (increase in severity category), a Medicare claimant could receive additional coverage which equals less out of pocket expenses for the claimant. All patients are always advised to carefully examine the statements from physicians and hospitals and note the Medicare codes.

The ICD-10 Is Specific

The ICD-10 is inclusive when classifying the specificity of illnesses’ whether it be an ordinary cold or run in with a guinea pig:

For those interested, an online searchable ICD-10 is available here.