The Affordable Health Act (ACA) also known as Obamacare is again being challenged in King v. Burwell which is currently before the United States Supreme Court. A decision in King v. Burwell is expected in June 2015.  Americans in 37 states who purchase health care insurance on healthcare.gov, the federal insurance exchange, are in danger of losing the tax credits made possible by the ACA.

What Is At Stake in King v. Burwell? 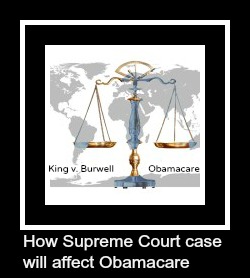 What is at stake is the affordability of the Affordable Care Act for millions of Americans. Without the subsidies and tax credits the ACA is no longer affordable to the population that is seeking health insurance and is mandated to purchase health insurance by the ACA.

The supporters of law emphasize intent. The intent of the ACA is to ensure affordable health insurance is offered to Americans and the language of the law and the affordability of the premiums is tied for most purchasers into the tax credits which helps subsidize the cost of the premiums.

The challengers refer to the specific language of the ACA. The language of the law specifies tax credits are offered “by” the state exchange which would not include the federal insurance exchange. Should the plaintiffs prevail in King v. Burwell the options are unknown as to how the ACA would or could be reworked to reflect the ruling.

Effects On the 50+ Population

Experts, analysts, insurance companies and politicians would all acknowledge that a diverse population in a state or federal exchange is what makes the exchange financially work. It is predicated on younger healthier individuals who usually pay lower rates but statistically need access the system less offset the costs of older Americans who pay more, but also utilize the health insurance more. The intent of the ACA was to present a system so that all could access healthcare within the means of their income. Affordability is subjective to each person, but the ACA also mandates coverage, it is not an option. The ACA does provide hardship provisions if one qualifies in lieu of a penalty for not obtaining health insurance.

Americans who purchase health insurance and are in the 45-64 year age range are at risk to be unable to afford health care due to increased premiums because of their age and the structure of the insurance industry. The decision in King v. Burwell will directly affect “middle aged” Americans who are too young to access Medicare, but too ‘old’ to qualify for affordable insurance rates.