Most people enjoy spicy foods and sauces, and but just how spicy is too spicy for your personal taste? The Scoville Pepper Scale is the answer to the why and how of cooking with peppers.

For many discovering which chili peppers, sauces, and spicy foods satisfy their need for heat and which ones are too hot to handle comes down to trial and error. Personally I’d be the first to admit I am a wimp when it comes to spicy foods.

What I did not know, but know now…. there is a reason and a tool which determines the “heat” of a given ingredient or sauce . While experience is probably the best teacher, before you subject your taste buds to that burning, numbing experience that tells you that the food you have tasted is more than your palate can withstand, the Scoville pepper scale will provide forewarning. When treading into new food adventures and consulting this scale, I could foresee which pepper adds too much spice for my wimpy spicy taste buds or to add spice to a dish when entertaining guest who I know like spicy foods. 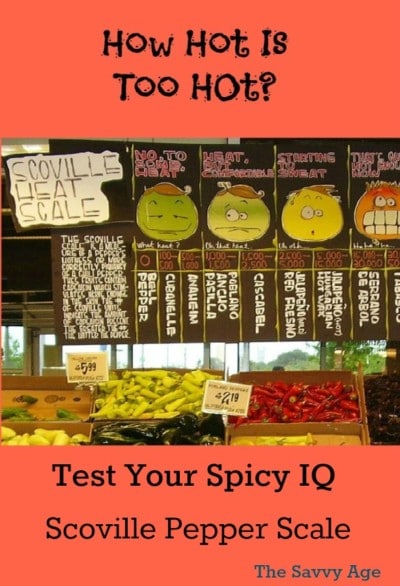 What is the Scoville Pepper Scale?

The Scoville pepper scale was invented in 1912 by a chemist by the name of Wilbur Scoville to measure the Spicy content of chili peppers. This scale is used to measure the Pungency or Spiciness of Chili pepper and other spicy foods such as sauces. The test used to establish each foods place on the scale is known as the Scoville Organaleptic test.

Originally this test was administered by grinding up a set amount of a chili pepper and mixing it in a solution of sugar water. This solution would then be tasted by real people. The peppers would continue to be diluted over and over again until the tastes no longer felt a burning sensation on their tongues when they sipped the liquid. The spicy ingredient would then be assigned a number based on how much it needed to be diluted.

The test is now done by a machine, that basically mimics the human taste buds, which measures the pungency in units known as the Scoville Heat Units or SHU. For an informative doodle, visit the Google Doodle celebrating Wilbur’s 151st Birthday!

How to Use the Scoville Pepper Scale


The numbers on the Scoville pepper scale  definitely tell the spicy tale just visually.  However, it is possible to use this scale to determine the pungency of a given pepper, sauce or other spicy food by first determining the heat level of a pepper known to you to be acceptable to your palate. You can then look up the heat units of this pepper on the scale and check and see which other pungent peppers fall within the same number of units. If you are feeling slightly adventurous, but don’t want to burn out those taste buds for hours, then simply choose a new pepper you haven’t tried with a slightly higher SHU.

The Scoville pepper scale may not significantly change your life, but it can be useful tool for those who enjoy the adventure of trying and cooking new foods, and want to add to a bit of heat to their cooking without, making the dish to too spicy hot to be eaten. Learning how to use this scale is just one tool, that can make eating more enjoyable and turn a good cook into a cook that is more in control of the ingredients the use.