This is a story that will brighten the inventor spirit as grassroots funding and a dream has combined to make this dream not only a reality but a success.

Flow Hive is the creation of the father and son team, Cedar and Stuart Anderson of Blue Bay, Australia. Indiegogo is the crowd funding site which was established in 2008 and provides the vehicle for voluntary funding of projects from all arenas.

What Is Flow Hive?

Flow Hive is a honey distribution system which allows ‘honey on tap’ from an beehive. The revolutionary design allows beekeepers to access honey from beehives by simply turning on the tap. The bees do not have to be disturbed and the safety of the bees and beekeepers allow ease of safe access. Beekeepers throughout the world are very interested and enthusiastic for the release of the invention in 2015.

The Flow Hive Indiegogo campaign has crushed funding records. The original request was funding for $70,000 USD and to date, $6,247,582 USD has been raised. There are 21 days left in the crowdfunding campaign and the campaign has exceeded its’ financial goal by over % 8,900! Total funders thus far equal 14, 150.

This father and son team are the inventors of the Flow Hive. Based in Australia, the team continues to update the progress of the Flow Hive on the Indiegogo site and through their Youtube channel. Details regarding shipping and international shipping continue to be accommodated with the goal of affordable shipping.

Their goal of honey on tap and a decades worth of testing and innovation is coming true with the help of an energetic and enthusiastic group of Indiegogo supporters. Grassroots funding does and can work and Flow Hive is a good example of why crowdfunding exists and what it can accomplish. 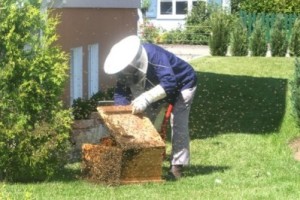