I’m a middle of the road quiche fan, but this recipe sparks up your quiche with a hash brown crust. Who can say no to the tater? 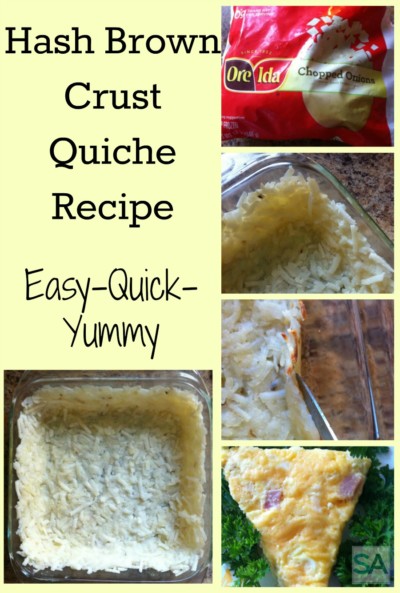 Add hash browns, onions if dseired and butter to baking dish, mix together.

Press hash browns into a 8″ or 9″ pie plate. Another option is the 8″ square glass dish as I found it works better for the entire dish. You are simply making a hash brown pie crust without the pie filling.

Bring the mixture up the sides of the baking dish to form the edges.

Bake at 450 degrees for 20-25 minutes until lightly browned. ***Important to lower temperature in oven according to quiche directions***

Fill the baked hash brown crust with quiche mixture and bake according to quiche instructions.

Can be easily tweaked to add herbs or spices to the hash browns if desired.

This is a very flexible recipe as the crust is independent of the quiche. Choose your favorite quiche recipe whether the recipe be low fat or with egg substitute. Olive oil can be substituted for the butter in the recipe.

The hash brown crust adds a nice bit of body to the quiche without being heavy. Enjoy!