A quick internet search revealed a long history of Grand Marquis and Crown Victoria owners with headlight failure due to a faulty LCM (Lighting Control Module.) The car forums were chock full of affected owners and their experience with driving sans headlights.

This is a view of my street from the Mercury Grand Marquis without headlights. Try navigating this at night. 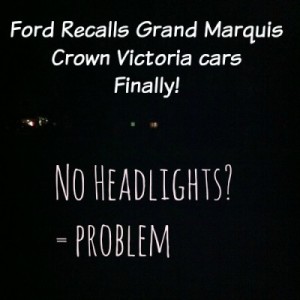 POINT: The affected models of Grand Marquis and Crown Victoria cars are years 2003-2005. Need I point out we are one month away from 2016. Not very timely Ford, understatement.

POINT: Why has Ford resisted issuing a recall until December 2015?

POINT: An NHTSA investigation was opened in 2008 and subsequently closed in 2009; clearly Ford knew of the issue and failed to issue a safety recall until December 2015.

You know better, you should do better. Too little too late for those of us who experienced a harrowing drive without headlights and stalling on issuing a recall. This does not instill a desire to purchase a Ford car.

Shout out to the North Carolina Consumers Council @NCConsumer for spearheading opening an investigation with NHSTA in April 2015. Read the letter to the NHTSA by the NCCC here.

According to Reuters, NHTSA reviewed 3,600 complaints, had 15 reports of crashes and one injury in their investigation of 500,000 plus Ford Crown Victoria and Mercury Grand Marquis cars.

I filed one of the 3,600 complaints with NHTSA regarding our LCM failure; thank you to the North Carolina Consumers Council for looking out for the consumer. Now let’s see what Ford has to say …