An exciting new technology in the fight against blindness has recently been approved in the United States. The Argus II retinal prosthesis system has been used successfully in Europe and is now approved for use in America. The Argus II is now the worlds first approved bionic eye.

The Bionic eye has proven to restore some vision for those with impaired vision or blindness caused by caused by conditions such as retinitis pigmentosa and age related macular degeneration. Up to this point there has not been an effective treatment or solution. 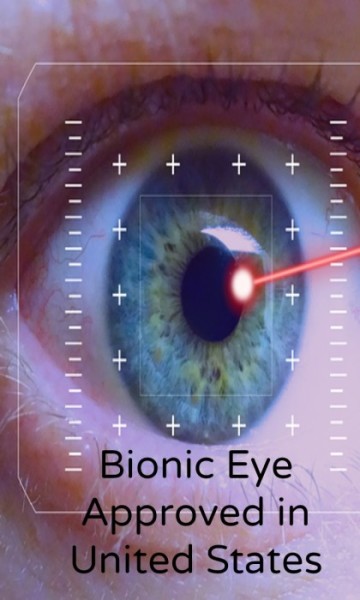 The bionic eye is essentially an artificial retina made up of electrodes for use with a special external mini camera worn on a pair of glasses, light waves are sent through the camera to the back of the retina to stimulate nerve cells. This is a direct electronic mimic of how a healthy eye would work normally. The implants are inserted surgically during a four hour operation. Early adopters are reported to be very happy with the results as the implant opens up and intensifies light, shape and movement to the patient but does not yet provide perfect vision.

Focus and clarity is likely to improve over time as the software technology is improved and updated. There is already planning and testing for a new generation of implants with even more electrodes, to enable clearer vision.

The people who will most benefit from this remarkable new bionic technology are senior citizens, who experience the greatest rate of macular degeneration, as the bionic eye needs to have a healthy optic nerve and a developed visual cortex.
This means that only people who have previously had healthy vision are able to use the bionic eye, restoring vision in people who have been blind from birth is still un-achievable with this device. Patients who make use of the bionic eye will find they need time and assistance to help get used to the implant, but that results will vary from person to person.

There are twelve centers in the Unites Sates which are accepting patients for consultation and evaluation. The University of Michigan Kellogg Eye Centre has performed the first two successful procedures since its’ FDA approval. Eligible candidates must be a minimum of 25 years old and have end stage retinitis pigmentosa with no light perception or “bare light” perception in both eyes.

While the Argus II is new to the United States, the first bionic eye operation occurred in 2011 in Italy. Since the first operation, 18 operations have been performed in Germany and 12 in Italy. It is hoped more hospitals will be able to perform the operation in the near future. The operation does not restore eyesight, but a patient should be able to distinguish shapes and figures after the operation and adaptation phase. Patients report as time passes, the brain continues to improve its’ processing of images by the bionic eye.

As our population ages and our lifespans increase due to good healthcare and nutrition, a chief complaint from the elderly has been that nothing could be done to restore eyesight. With the amazing advances that bionic science has recently shown, older people can live longer, healthier, visually free lives.

Facebook For Seniors
Should An Aging Parent Consider A Reverse Mortgage ?